It’s that time of the year where the political ads and sound bites are getting the best of us.  I, for one, get real tired of it.  Some people can’t suppress racial leanings or feelings toward women, but that’s a problem they have.  One guy said everybody is not like that and you can’t hold it against a whole party and hell he might be right to a certain extent.  Who really knows? Obama should win, but not by that much and just think if the Republicans could have rousted out a decent candidate they could have controlled the world and Mars for the next eight years.  But I don’t get paid to advise anybody.  Keep in mind, no matter who does get in there, nothing will get done – there are way too many agenda’s going on today and the last time I checked pissing contest don’t add up to results or sustainable progress. Term limits could possibly solve some of that mess!  There are way too many Demagogues and power mongers who make their way to the halls of Congress and political discourse deteriorates into an ugly exercise of self-importance and underhanded tactics. Plus, I may not vote at all because I don’t want to show an ID to some old diddy  at the polling place -who probably thinks I’m a Mesican. I'm too old to be deported while they figure out I'm Indian. For you folks who do vote, sometimes the chain of low-expectations needs to be broken, nationally and locally. Good luck! 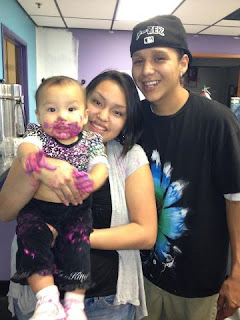 We are due for a quarterly General Council meeting this Saturday.  Those are some hum-dingers, entertaining and hurtful for some at times.  It’s time for elected officials to pay for their sins of the last three months. I’m a long-time attendee and participant and after the first rush of tears it becomes alright.

On the home-front, my great granddaughter Shuggie is walking now, she started a few days after her birthday.  When I get done with my work day duties I have to get my Shuggie fix, hold her, kiss her and baby her. She makes my day.

I have my garden plots ready for Spring planting. It took some work but it’s done.  I’m also working on a couple of wood projects and that’s always fun. I also track KU basketball recruiting and they are getting the big dogs for the future.  In Self we Trust!