The Year of 2009 had it's ups and downs but isn't that true on most Indian reservations? 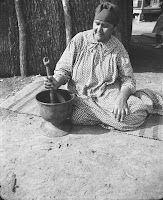 In a semi-political sense, I was reelected to another four year term on our gaming commission. Elective positions are what an old guy called "here today, gone tomorrow jobs." I think those are wise words because you never know. On the positive side, I enjoy working in the regulatory field, I'm near home, my religion and my family which is a gigantic plus. At the end of this term I will be eligible to retire. Maybe I will do that or maybe it's best to keep your options open. If I retire I can work in my yard and garden and I might be like the Godfather - be working and suddenly keel over. Oh well, I could think of worse ways to die, right? 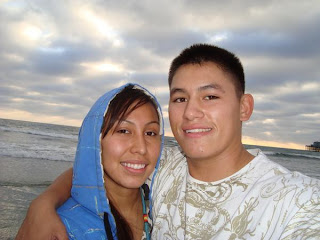 My granddaughter married a U.S. Marine and moved to San Diego. Tara has been with us since she was a baby so her moving is a big change for all of us. But, we have four other grandchildren to keep us occupied. The beat goes on and there is no time to get lonely.

Our tribe started building a 18-hole golf course this year and I watched them work on it every day on my way to work. It will be a tough course. We toured the course in a golf cart and there are several holes where the creek meanders through, so it will be decision time - lay up or go for it. Most hard-heads thinking they are Tiger Wood clones will go for it, but there is only one guy like that and he sure doesn't live around here. Oh, the chronic cheaters will come up with their transgressions and have consistent low-scores, but for most it's going to be tough. I guess everybody can't be honorable like Tiger Woods on the golf course.

I'm a political animal and political events watcher and every financial initiative is worked over pretty good around here. In one meeting it can be voted in and the next voted out. The clinic comes to mind but for some reason the golf course escaped that fate. Without all that drama, the course moved along nicely and it will be a great addition to the Potawatomi landscape.

Allow me to take a hard right on memory lane for a second. When my brother Larry died suddenly a couple of years ago, I pretty much gave up the game. Before that we enjoyed playing the game and our times together even if it turned into a competitive thing. We both looked forward to playing 18 holes of golf and we got to play some damn good courses and some damn bad ones. Those days will always remain on the positive side of the old memory bank. I'm sure he's working hard on his game for our rematch.

Now with the new course coming on-line and my grandchildren nagging me to get back out there, I will probably give in and get back out there. But I'm sure the yard and garden work won't be allowed to go by the way-side though. Plus I have to get out there with Jim Potts, B.J. Darnell and Frank Shopteese. Frank is a transplanted Texan who saved our team many a time with his great game.

Who knows what will happen in 2010, but it's to our benefit to get up ever day and enjoy the ride while we can. When you get older, it's all you can do. Happy New Year!
Posted by GM at 6:56 PM 2 comments:

The Pictures on the Wall 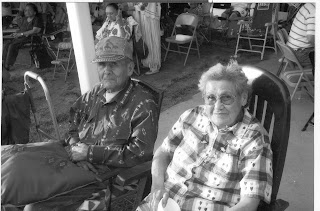 Our casino has added some old pictures from an era long since past of tribal members. They are attached to the pillars in the gaming area. I think it’s great and the casino people should be commended for this positive action. With the pictures on the front entrance and now these on the inside of the casino this puts our casino up there with the best. Prior to this, I thought Soaring Eagle Casino in Michigan and the Meskwaki Casino in Iowa had done the best job of showing and displaying some of their traditional values.

We have to recognize and remember the old people who stayed here on the reservation through thick and thin. It wasn’t always great here. It is now late December of 2009 and we are bracing for more bad weather with ice and snow in the immediate forecast, but we have more resources to fall back on now. This was not true for some of these people in these pictures. We can make a fast trip into town to get our supplies whereas a long time ago bad weather made that doubly hard. My Aunt Jane said back then, they had to stock up on items when they did get to town, in case an emergency came up or bad weather. If our electricity goes off, we can go to the hotel or some of the tribal buildings that are now equipped with generators, but in the old days they had to have a pile of wood to keep warm. Today we have suitable housing and jobs close to home. The people in these pictures had to travel many miles to work or move away entirely. 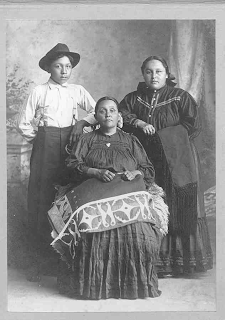 Some of the pictures show our traditional dress style and it is great and the beadwork is also tremendous. Some of the pictures came from private collections of tribal members who saw the value of sharing. The Potawatomi would go dance at rodeos, pow-wows and at our old fairgrounds. Somebody understood the value of preserving a great moment in time.

During the Depression and War years, traders passed through the reservation and the old people being poor as the day was long would sell some of their prized possessions, such as beaded vests and dresses, to get by or to purchase needed supplies. I’m sure some were victims of exploitation too. That’s why a person can see some of these items in museums and in personal collections. Those are lost, but it is a chance to copy the beadwork patterns by looking at these pictures and duplicate them. So all is not lost!
Posted by GM at 9:25 AM No comments:

The other night, Henry Pahmahmie died at his home. He turned 59 in August. He’s been sick for awhile with a heart problem and I guess he refused to go to the doctor. So many of us are bull-headed like that!

We’ve known each other for close to 46 years starting back in Pony League days. Larry and I played for a Hoyt baseball team and we won our league and thought we were pretty good. One time we played Delia, in an inter-league game, the team Henry played on and he threw a no-hitter at us. Boy, that guy could throw that ball.

In high school we played football together for three years, he was one grade up from me and our teams did well. During the four years I was there we had a lot of Indians start and we only lost 2 games in that time. One of the losses was to Denison 14-7. I played defensive end and Henry played the other end. They would run a sweep at me but I made the tackle every time so they went Henry’s way and wiped him out and scored. After the game I told him “well, at least they didn’t score around my end.” He was mad at me for a long time after that, but got over it. I always wanted to win. He made all-league four years in football and scored about 20 points a game in basketball.

On one of our baseball teams, he pitched us into the state tournament. We beat a Lonnie Kruger-led Silver Lake team in the regional finals 3-1, but it was because of Henry’s pitching that we did that. It sure wasn’t because of the rest of us. He had the size and the arm to really do something but he didn’t have the drive, but he remains the best pitcher I ever saw in these parts – then and now. I didn’t go out for baseball my senior year because I told the rest they wouldn’t be worth a damn without Henry and I was right.

After school, he joined the army and went to Vietnam but never talked about those days whatsoever. Later on we played softball on different teams and eventually got us a team of local Indians. We were pretty damn good winning 88 trophies over the years. Henry pitched and threw a knuckleball. Man, I could never hit that damn thing either. I don’t want to give you the impression I couldn’t hit because I could, but some guys just had my number.

Our team started to fall apart in 1984 when my brother Bubs died. It took the wind out of me and I eventually gave up the game entirely. Henry named his boy after my brother – Andrew. I watched his kids grow up. They are good kids. His daughter Josie could hit the ball a mile and I used to tell Henry "damn she can hit it further than you."

I guess you could tell that we gave each other a rough time, but that’s the way it was. In an earlier life, when we partied together the football, baseball and softball stories were told every time and they weren’t lies. The others would say “oh not again,” but in time the stories stopped until now. He had his faults, I had mine but we were friends.

It’s a rough go seeing so many of my family and friends dying off. All of us should appreciate life, no matter how it’s served up to us.
Posted by GM at 3:34 AM No comments: