All is not fun and games!

I watched the sad events of the Cody Baker funeral unfold last week from a distance. He was killed August 3 in Warduk province in east central Afghanistan. I didn’t know the young man and he didn’t know me, but I felt the grief his family was experiencing, and all of it brought back a flood of memories for me. There was a young man, almost the same age as Cody Baker, named Martin Jim, Jr. who died in Vietnam in 1971 and by anybody’s calculations that was a long time ago.

They both were young, both died from explosives, one in Vietnam and the other in Afghanistan, thousands of miles from the streets of Holton, Kansas and the reservation of the Potawatomis. I don’t remember anybody else dying from war during this span of 1971 to the present time. I could be wrong though. Hopefully, it will be another 40 years before it happens again.

Allow me to tell you about my time with Martin Jim. Martin grew up on the Prairie Band of Potawatomi Reservation. We knew each other as we grew up, but for the most part we attended different schools until high school where we became the best of friends. He was like a brother to me. Later I named my daughter after him. After school and before, some of the guys from the reservation joined the service and usually ended up in Vietnam. It was called a conflict. In our circle of friends, my brother Larry joined the Army, Vernon Yazzie joined the Marines and Martin Jim joined the Army. They spent their senior trips in Vietnam. All of these guys, along with several other veterans from that conflict, are gone now.

It wasn’t a good story to tell: After eight days in Vietnam, Martin Jim was killed by a booby trap. Many years later, a man from Missouri came to the reservation and told of the circumstances of Martin Jim's death. Jim Jenkins, who lives in Missouri now, served in the same unit. He said Martin was sent out on point, and Jenkins said this usually didn't happen with new soldiers. And there were booby traps set by the Americans, and Martin walked into one of these. Jim Jenkins was walking three men back, and the bomb killed Martin Jim and badly wounded the man in front of him. These same circumstances happened to another unit close by. It was a deadly accident of war, but that was little consolation to his friends and family.

In 2009, a man named Don Lowell told about his experience with Martin Jim. He said: “Martin was truly an Airborne Infantry Soldier! I knew that Martin was a special warrior when I first met him. Martin had no fear. Martin was willing to do what he believed was right and honorable, with no concern or respect for his own well being. Vietnam was a tough place. Those of us that survived were very fortunate and we never forgot and never will forget those who willingly paid the ultimate sacrifice for the freedom we enjoy in this Nation. There is a quote that I once heard. I don't know the author. However, it says "For those who have fought for it, Freedom has a taste the protected will never know".”

Life does have some strange twists as evidenced by Jim Jenkins and Don Lovell walking into the lives of the Potawatomi many years after the death of Martin Jim and telling some of the story.

Cody Baker died the same way, but the bombs were set by the enemy. I imagine Cody Baker was much the same as these guys. They wanted to get out and see the world and for a short time they did get to experience a different life, but in the case of Cody Baker and Martin Jim they will never get to experience the trial and tribulations or joy of children, and grandchildren or grow old, but if it’s any consolation, they also won’t have to live and relive the war experience over and over, as many combat veterans have done. Sadly, war does have consequences and after-affects.

I’m sure the funeral, the grief and all the events were just a blur for the family because that’s the way it was when Martin Jim died. It made me feel good to see the recognition Cody Baker received from the community and all the good words from his friends and family - all of that is well deserved. An anonymous author once wrote that people will always live if you remember them.

As I said the family didn’t know me. I wanted to go to the funeral home and sign the book, but sometimes it’s better for guys like me to remain in the background, because we know that words in times like this will never suffice!

Burning hot July and a mild August on the Rez! 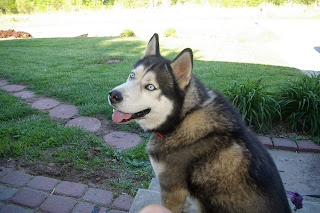 Around here August turned mild and it rained, which didn't draw any complaints, in light of the record-breaking heat wave of July. This is rare, usually it's burning hot in August, not July.  Global warming, I guess.

Besides the change in the weather, the economic picture changed for some.  Yes we do have Wall Street watchers here and it's interesting to see the reactions when the market goes for a roller-coaster ride. I personally don't pay attention to any of it.  I use the head-in-the sand approach, you know kinda like our esteemed Washington D.C. politicians do!  In the past Indians only survived and when they got old, they could only rely on a small social security check and/or a rental check from their land.  It wasn't an easy life! Today, there are jobs, 401 Ks, per-caps and an occasional jackpot to get Indians by. This isn't true for all tribal members, but it is so for those who work for the tribe. In that regard, the casino has changed the economic landscape of our tribe. That is a positive!

We missed the Potawatomi Gathering in Michigan this year.  I wasn't up to the 800 mile drive, it is a little too much anymore.  Like I always say, I'm not the star of the show, so I'm sure it went on without me just fine. I try to limit my excursions off the rez and do venture off once in awhile to see how the world has changed and to read a different newspaper. I did get a lot of things done around here though.

During past Gathering trips, my corn would have time to get hard in the field, but I was able to get a decent amount this year and that's because I stayed. Speaking of back then, those old Indians too depended heavily on their gardens.  They dried corn and that is no easy task, along with pumpkin.  If they didn't Winter would be hard. There was no time to be lazy if you wanted to eat. Today we have gardens, but not to the extent they had back a few short years ago.  As I said, we don't depend on it like they did because the proverbial store is right on the corner.  I couldn't imagine having to dry all that corn they did or pumpkins, beans or put up bushels of potatoes and put them away into make-shift cellars.  People helped each other then, so it might not have been as hard but it would still be time consuming.

At this point in the Summer, most of the crops are in for small-time gardeners such as myself, but I'm fairly satisfied with the production cycle this year.  I thought the heat would burn it up and it did on some of it but overall I did alright. Another good thing with staying home was I didn't have to come home to an overgrown yard and speaking of the yard - mine stayed green all summer despite the heat spell we endured.  I mow my own yard and will as long as I'm able!

Every year we have a prayer service for our kids going back to school so they will have a good  productive time learning and a safe journey on that yellow bus, but we are in a dilemma now.  With the a/c thiefs having their way, they put up a gate with a lock at the entrance of our prayer house and we don't have a key to get in now.  We will just have to wait, I guess!
Posted by GM at 6:58 AM No comments:

Allow me to jog down memory lane for a brief moment. I wanted to write a few words about an older woman that once was in our lives many years ago when we were much younger. Her name was Susie Masquat, but we called her Grandma Susie. She lived about a mile from our home. My Mother would take us along and we would walk over to her house (now we act like a mile-walk is torture) and they would visit in the Potawatomi language they knew and it sounded so easy for them. My Mother said Grandma Susie would tell her about old Potawatomi stories in the Potawatomi language.  Later when my Mother was older, I asked what stories did you talk about, but she had forgotten. I should have asked a whole lot sooner than that!  Wouldn't that been something to preserve? 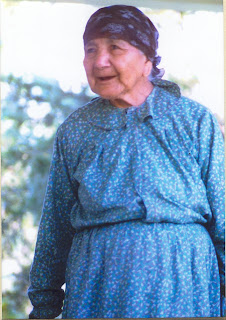 Grandma Susie would walk back to our house with us. I can still see her and my Mother walking down that dusty road and can you imagine the whole slug of kids walking along side them. Oh, there was no black-top roads back then. She would stay with us for a night or two. One time she cooked up some “pugna,” a fried corn cake we have in our tribe when the corn is ready. When she made it the first time, we didn’t really like it since we were accustomed to boarding school food or whatever, but we were raised not to say we didn’t like any food. Poor people eat what is front of them and not complain, so we told her we liked it and she made us another batch. That was then, now we can eat it till the belly can’t take anymore.

She would go with us when we went swimming in the creek south of our house and would swim too. She was old then but she could walk a bunch and swim and cook.  She also was also an accomplished dancer at local pow-wows and she wasn't a bit shy! We thought so much of her and really did look forward to seeing her. Our times together were memorable. I can still hear my brothers and sisters holloring "Grandma Susie is here, Grandma Susie is here."

Now the old house Grandma Susie lived in is gone,engulfed by weeds and undergrowth.  She too is gone and only then did we find out she wasn’t really our grandmother and there was some disillusionment, but that fact never took away the good times of being around her.
Posted by GM at 12:37 PM No comments: