Somebody is watching over my brother! 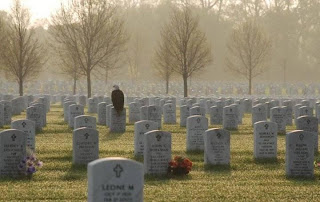 A friend sent me this picture that appeared in the Minneapolis newspaper awhile back. It was taken by an amateur photographer Frank Glick at 6:00 am on June 25, 2011. The Eagle landed on the headstone of a World War II veteran at Fort Snelling Military Cemetery.  There was an article written by the Star Tribune mentioning this veteran and his accomplishments and said the Eagle in some cultures is considered a symbol of good luck.  I don't know which culture they were talking about, but the Eagle is considered the King of the birds in ours and has a powerful presence no matter where it goes and is a majestic bird.

It made me feel good and  and sad to see this perfect picture. I thought: a kno (eagle) is watching over my brother Larry's final resting place and that is good. He died in 2007 of health complications, gone but never forgotten. He too, is buried in Fort Snelling Military Cemetery, by his choice not mine. In fact, I miss him every day, I miss his phone calls, emails, his commentaries, and watching him get frustrated over his golf game when we played in our annual golf outings. But I was lucky too, I got to be with him for a good number of years through thick and thin and nothing ever will take away the memories, except when I go join him.
Posted by GM at 5:08 PM No comments:

The Effects of Heat! 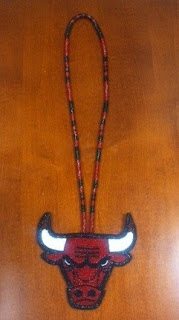 Okay, it’s summer time and the weather in Kansas does historically get a bit hot, but this reservation and the State of Kansas have endured a heat wave of epic proportions. Two days in a row, it hit 106 degrees – the hottest days on record since 1906. For the last 10 days it got over 100 degrees and we might get a break of a couple of days in the mid-90s then it suppose to get back to 100-104 degree area again. I guess it could be worse, we could be living in Texas or Oklahoma.

It’s so hot that the grass has lost it ambition to grow, gardens are burning up, the pools are getting a work-out, the a/c units are working over-time, some people find it too hot to go to work , and people are dying from heat exhaustion, which may explain why we have a gang of air-conditioning unit thieves hitting reservation churches, sometimes twice – the heat made them do it. They are a brave bunch to steal these big units, load them on trucks and drive away on our reservation roads. Brave or stupid! The people here are insulted over these blatant acts. It’s like they are saying “we’re going to come to your house and take what we want and you can’t do anything about it.”

It’s hard to say why this is happening. This gang may need to subsidize a drug, booze and/or a prescription drug habit. Originally, we thought they were after the copper in the units, but after looking at the insides of a unit there isn’t much there, so the resale value has to come into play. Thievin is one thing, but buying stolen goods is wrong too. Maybe it’s somebody who has a grudge against the Tribe! Maybe at some point they were fired or denied a service, it could be something like that because those a/c units have been here for years and nobody has bothered our churches at all before this outbreak.  But surely they can’t have a grudge against the institution of a prayer house, after all atonement does come for all. Stealing from the churches is not good for their ultimate judgement day in another life or the well-being of church members in this life. The Tribe has offered a $5,000 reward for these yahoos and there is no honor among thieves so the snitching will happen soon enough.

Who really knows what motivates a spree like this? Maybe they just want a fine air-conditioning unit to keep their impressionable kids and knowing wife cool during these hot summer months. Maybe they will catch them, maybe not, but this has to go down as hard times for the reservation churches. They have a right to feel wronged – after all they’ve been here for years and prayed for all and, and never figuring they would be targets for lowly people like this bunch.  Damn, hopefully they don't live amongst us!
Posted by GM at 4:51 AM No comments: 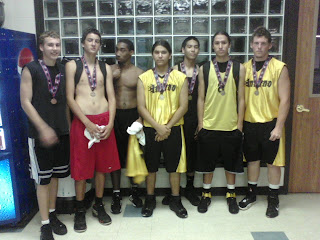 It was 106 degrees on Saturday and 102 on Sunday and working outside was a limited endeavor, so we went to watch my grandson Hooty play in the Sunflower Games in Topeka.  They won a few games and ended up taking third place in the games.  I like watching basketball, although that wasn't always true.  I was always a die-hard KU basketball fan, but that was on the tube, and start watching them when Ted Owens coached there and that was years ago.  I start watching local basketball when my granddaughter Tara played in high school and junior college. We went overboard and made almost every game.  Hooty likes the game and now plays on a summer-league team coached by Charles Nez.  The team likes to run, run and run some more.  There is so much potential in these Indian boys.  They have some long-distance games scheduled and a tournament in Texas that I will try to go to, if my schedule allows.  I'm proud of Hooty and want to see him happy playing sports!
Posted by GM at 6:58 AM No comments:

A facebook friend asked me to print some pictures of my garden, so I will oblige.  This is a picture of my corn that I took from the road.  In the background is my barn, where I have my workshop and the upper part serves as storage and believe me my daughters have stored their stuff in there for years.  I might have to charge storage fees to supplement old-age funds, but we all know that won't happen. I had a weather vane on top of the barn but the big birds attacked it and destroyed it.  I may replace it in time!

Also in the background is my daughters trailer and my Purple-Martin birdhouses.  My corn did come up spotty but what did come up looks fairly decent in my opinion.  I suppose I could say "in retrospect, I should have been a poet or a farmer."  This is the best corn I've had in years.  We are having a heat spell, but corn does well in this kind of weather.  When the rest of us are crying around for water and air-conditioning, corn goes on and on.  My cucumbers, tomatoes, and tators have done well also.  I have no complaints and I'm satisfied with whatever I get out of my humble garden.  We've lived in our house for 34 years and part of my contract with my wife is that I take care of the yard. In fact, here is a picture  with a view of my yard and garden in the distance. I enjoy planting, growing and seeing if I can improve my yard every year.  When I get abit older, maybe I can watch my grandchildren do all the work I do now and I can sit under a shade tree and tell lies to some innocent visitor!
Posted by GM at 11:42 AM No comments: