Here lately I was asked to give the commencement speech at the Kickapoo Nation Indian School.  For me, this was a great honor to talk to a group of graduates,  I didn't want to do the speech because at times I can get real reclusive so I had to think about it but did accept and I'm glad I did. It will always be a positive memory for me.

It might be time to get the old hose out and water your garden.  Why?  Us Indians are tired of hearing remarks about doing a rain dance.  You hear smart talk from the mayor of Topeka and people at ball-games. They think they are cute, but they are just sarcastic and stupid in my eyes, plus it seems like old beaten down politicians get away with racial remarks in Kansas.
A long time ago prior to having our seasonal prayer services, local farmers would bring food over to our church because they wanted the same things Indians wanted, rain.  For us, we would pray for rain for our gardens, for them it was rain for acres of produce.  It was a respectful gesture on their parts. People have lost respect for nature and what it has to offer and for each other. 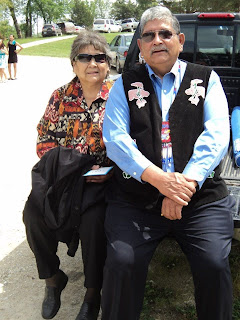 So we are holding back the rain till we get a damn apology.

The weather is weird though.  It seems like mid-Summer here with the grass getting kinda crispy.  I cut back and relocated part of my garden so I can run hoses to it during the dry times.  I put in some hours getting my garden moved and hopefully it will pay off.  I enjoy working in my garden but really don’t have time to take care of a huge garden.

I pulled a leg muscle and have been hurting for two weeks now.  I had three knee operations and I learned to live with pain so I didn’t think anything of the pain, but my wife noticed how swollen the leg was and ordered me to the local clinic.  They put me on some pills that didn’t agree with me so I quit taking them.  I just want to get well enough to get my yard work done.  I guess when you get older the body starts to fall apart.  Hopefully the pain will go away soon.

I have a three day holiday and I will stay home and putter around the yard – work, take a break, work some more, take a break and hopefully I will see some results.

Oh, thanks to all the veterans past and present!
Posted by GM at 9:00 AM No comments: 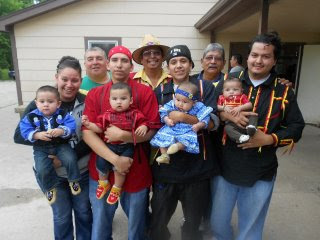 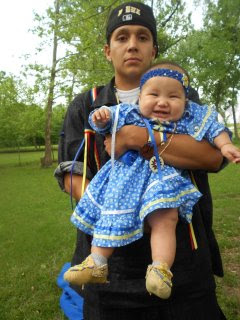 On May 6, the birthday of my girl Dumplins, we had a baby-naming ceremony for my great-granddaughter Julisa.  We have called her JuJu ever since she was born seven months ago. When this little girl entered this world she immediately captured the hearts of everyone in our family.  I said several times I'm a lucky man to live this long to see her born.  Her Indian name is Shug naab go kweh or if you wrote it the way it sounds it is Shug nob go kweh.  She is named after Voncile's relative from way back, in fact the lady owned the land we live on today. Our entire family attended the ceremony and family support means a bunch.  She was a trooper throughout, didn't cry at all but she is used to being around large crowds.  We had her ready and adjusted because we hold her and spoil her constantly.  The day was great and the Great KU fan in the sky smiled upon what took place on the Potawatomi Reservation.  Now the challenge is to change gears and call her by her Indian name instead of JuJu, a name I had become attached to.  Another point is when she was born, I said we were getting too old to watch babies but do you think that panned out?  No, we watch her when they go do laundry or go the local parlor where sinful gambling takes place.  In the group picture, taken after the ceremony was concluded, is picture of four of the babies named and the ones in the back jumped into the picture, including me.  There were 16 named, including babies and young adults.  The names used are from their relatives from the recent past to long ago and a  sense they will be never forgotten that way.We were all tired when we made it home, but all the hard work and sacrifice paid off and in fact, it was sad to see it end.