The big election, visiting, and operations!

Well, the November election is fast approaching.  Although Obama won’t capture the  six electoral votes in Kansas, he should win the over-all Presidential election. A man of color has little chance in Kansas. They brought some national attention to Kansas by attempting to keep Obama off the ballot, which makes no sense because it is an entrenched Republican state and the six votes will go to Romney.  Yet, like him or not, it is rare for a sitting president to lose a reelection.  I personally may never vote again in these elections with the new restrictions in place:  “show me a driver’s license guy of color or we won’t let you vote in our election.”  I remember covering stuff like this in my political science classes at Washburn, but all of that b.s. was directed at the black folk.  They had all these literacy exams and other hurdles for them to fight through and for years they never got to vote. It’s history revisited. Oh, well my vote wouldn’t mean anything anyway. 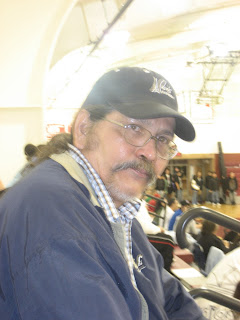 I recently drove to a meeting north of Minneapolis, so I stopped by to see my brother Larry’s final resting place at Fort Snelling Military Cemetery.  It is only the second time I went there since he died in 2007.  That was because of my own internal confusion.  I think sometimes I haven’t accepted his passing, but by going there it is working out.  It’s pretty damn hard to not have a twin brother around anymore and it sure took the fun out of golf.  I stopped playing that, too.  Somewhere along the line, I need to move on and I will.


My grandson, Hooty, had his third eye operation in less than six months.  It is a stressful time for all of us.  My girl has to constantly worry and deal with other people's hate and on top of that, she has to think about her son and his health.  We were there after the operation and will always be there for him and my other grandchildren. I would much prefer these things happen to me than them.

That’s why I never worry about racism from the outside. I don't say that lightly because I've seen some horrible conduct in my life.  In fact, I can understand that better, but it makes me shake my head to see Indians go after their own with a vengeance in our current system.  That goes against our value system in a big way.
This weekend we have our veteran’s pow-wow at our park.  It is usually well-attended and the weather is going to be great.  I may go or not, but the three-day weekend will be a break from all this stress and a chance to spend more time with Hooty and of course my great-granddaughter, Shuggie.  She is the star of the show for our family.  Hooty loves her, I love her and the rest of the family loves her.  Hard to beat that, huh?