I know this isn’t good to talk about, but all the political news coming out of D.C. is sickening to hear and read about. One side hates the other and vice-versa and it doesn’t look like there are any viable political solutions in sight or at least any time soon. On January 1 many people will wake up with a hum-dinger of a hangover, but also 160,000 million hard-working Americans will see payroll taxes go up, and another two million will lose unemployment benefits because those jokers in D.C . have to indulge in a political pissing contest. It's bad enough, that they already see their taxes thrown down into a bottom-less pit with no results. 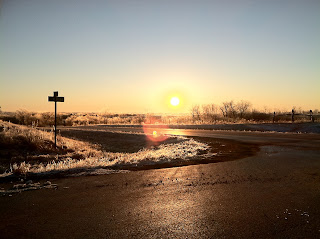 It’s the same old tired thing, the Congressman who is already comes from a rich family, has a truly nice salary, great benefits and one sterling retirement package will tell his adoring constituency what they want to hear and they will bring back the pork to their districts and everybody is happy. Of course, he has his fingers crossed behind his back when he is saying all these political things to his voters. When it’s all said and done, the payroll tax will go up, the esteemed congressmen will go on break and go home and tell their people that it’s the other side holding up progress in the country, Obama will fly to Hawaii to play a little golf and lounge on the beaches which is good for them, but not for America. Of course, we gullible folks will vote them right back into office. Damn, and people condemn Indian politics. Oh, well it best not to pay attention to politics anyway so you won’t be disappointed. Nonetheless, politicians will ruin everything we have in this great country if they continue to have free political rein.

We had some bad weather here in Kansas, but the main storm missed us. It will happen soon enough though. Christmas looms on the horizon and I need to do something about this shopping thing. Maybe it’s time to stop writing and do my best Tim Tebow imitation and offer a personal confession: I haven’t done any shopping for gifts and probably won’t. Wouldn’t it be pathetic to see me down at the mall at this stage of the game trying to figure out what to buy? The truth of the matter is that my wife does the shopping and doesn’t really want me along since I must give the impression that I would rather be somewhere else. She wraps the gifts up and the girls and grandchildren open up their gifts and say “thank you Misho and Grandma.” And then I say, “ok, what did I get you.” That too is pathetic, but what can I do?

Also during these festive times, I sometime get scared and fearful when I get behind the wheel of my vehicle. I can just hope those beastie deer don’t decide to cross my path because they can do some real damage to your car and to you. They are heated up like a politician in a D.C. hotel room, so its not all their faults.  I did see a beautiful wild-life scene the other day on my way to Dancing Ground: A fairly good sized bobcat ran in front of me, it was right pretty and could cover some ground. The bobcat is a graceful animal. It's been awhile since I've seen one here! When I was younger than I am now, I used to own coon-hounds. I did a lot of hunting with my neighbor and one time our dogs treed a bobcat. I had it stuffed and still have it today.

Oh, on the morning news they said the dead North Korean leader has a warm corner in hell waiting for him, so much for good feelings at Xmas time! But don’t let all these dark writings hold you back from having a great Christmas. From me to you and your family: Merry Christmas!
Posted by GM at 1:28 PM No comments: 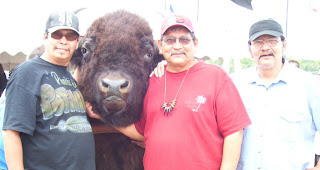 This the last picture we took as three brothers.  Larry, on the far right, died later that year in 2007.  We were at a Potawatomi Gathering and for the hell of it, we took this picture by the buffalo head.  It was crazy because a slug of people took our picture too for some reason.  I wanted to share this picture so I won't forget either.  We really had a good time that summer day! 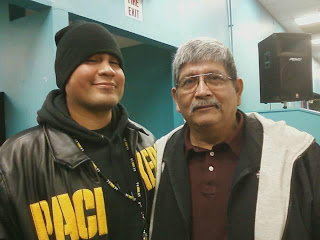 This is my nephew, Steven Mitchell, he dropped by from some tiny place near Phoenix, AZ. Steven wanted to visit his Potawatomi relatives for a few days.  I'm glad I was at the Craft Sale when he pulled in.  His journey was well over 20 hours on the train. My grandson Pat ko shuk wanted to know about him.  I told him he is the son of my brother Bubs and  he would be closer to an Uncle to him than a cousin, in our way.  I missed seeing him grow up, along with other nephews and nieces and I'm so glad to see them when they do come here to visit. It's hard for an old cold hearted guy like me to develop tears but I did today when my nephew hugged me, but don't tell anybody.
Posted by GM at 1:15 PM No comments: 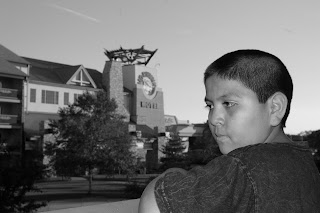 As I get older and try to write on occasion, I look back on possible influences. As a teenager which was a blue moon ago, my brothers and I would listen to Bob Dylan and Creedance Clearwater Revival in the 60s, but I don’t remember any good music happening in the following decades. I think Dylan and John Fogerty of the CC Revival were excellent writers and their work will stand out for a long time. They could put the words together in a beautiful fashion and tell a story of a torn generation, where revolution was the catch-word. People were against this and that, kinda like today.  For example, in the song “Fortunate Son” Fogerty sang:

He referred to how the rich folk didn’t go to war (Vietnam at the time), but all the poor people did – kinda like a bunch of young Potawatomi’s did back then. And Dylan had a message in all his songs. I always thought, damn these guys had such a gift of telling a story.  Can you imagine writing one hit song and living off the royalties?


I’m not much of a movie buff, but I couldn’t help admire the writing in the movie Forrest Gump. It was funny at times, serious at times and showed how Gump fell into the accidental fame category. One day, he was showing Elvis how he would dance to a song and pretty soon Elvis was on tv doing Forrest Gump’s dance. He was always in the background of some event such as the day they let blacks attend white schools. And since he could run so fast, “run Forrest run,” he parlayed that into a football scholarship at Alabama playing for the Bear. From there he went to Vietnam to become a war hero, a champion ping-pong player, a lucky fisherman and savvy investor to become a rich guy. His memorable quote on this:

"Lieutenant Dan got invested in some kind of fruit company.  So then I get a call from him, saying we don't have to worry about money no more.  And I said, that's good!  One less thing."

During the whole process, he was to meet several Presidents. “I’m going to meet the President, again,” in a voice only Forrest Gump could say – the emphasis was on “again.” But the point was that each story-line was so imaginative and believable and I was so amazed somebody could think of putting all these stories together in one movie. Never in another hundred years, in my opinion, will somebody come up with a movie like that again. In fact, somebody said recently all the good stories have already been told. It would be nice to be surprised though!

I thought Hunter Thompson could tell a story well and I read most of his books. They were descriptive pieces of work and I liked the way he told the story. Recently, I read a Simon Winchester book about China and he did a great job of educating the reader about this country and at the same time to tell a story, also very descriptive. A singer named Steve Earle wrote a novel called “I won’t be leaving this world alive,” and I don’t know that I’m going to read the book anytime soon. I might if I saw it on the bargain book rack, but I liked the title and who would have ever thought of a naming it that?

I covered possible influences in song-writing, movies and book-writers, but I can’t leave out college professors. I graduated from Washburn University in Topeka. I think they got tired of seeing an old Indian guy walking around their campus. The higher-ups got together on a cold winter night in the administrative offices and said "give that Indian his degree and get him out of here", so I moved on in the Spring of 1993.

Before I took that step into college life, I had worked construction and in packing houses, but a knee injury made me think about changing course. I had some help before I went to college. I always read during those early years, the early wild years but my time wasn't always an alcohol-fogged life. I read many books, newspapers and as many magazines as I could get my hands on especially those from the local laundry mat. So that made my classes fairly easy and the reading wasn't a problem for me, but I did struggle with the writing, at least in the beginning.  I worked hard at it, though. I went out and bought several books on the subject and read them extensively. I never developed into a professional, but learned enough to tell a story or something close to that.

I majored in Political Science and I took a large number of history classes (I lacked 6 hours from having a double major). Political Science was a hard subject but it was a helluva lot easier than the history classes I took at Washburn. Both subjects had some excellent teachers like Cecil-Fronsman, Freeman, and Wagner, to name a few. They made me work on the writing and of course the subject itself. It seemed like the 15 page papers never stopped but that helped me later when I wrote about our tribe and other stories.

All of this intangibles of life combined may help explain some influences that made my writing a bit easier. That's all I got to say about that!
Posted by GM at 2:06 PM No comments: