March Madness is getting closer!

As we wind down the mildest winter of this guy’s 61 winters, it makes you wonder why we have received so little snow fall.  I think I have more snow on my head then what we received this year.  With that said, we will probably get the hardest snow-fall of all time in March, but we have experienced that before too.  One year we went to the Denver March Pow-Wow and we hit a blizzard and had to sleep on the floor in a National Guard Armory in Western Kansas.  That was the last pow-wow we went to in Denver. 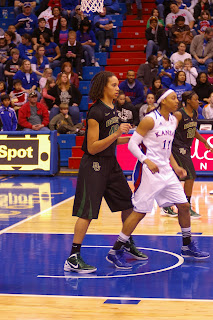 And this is the time of the year we’re we are heavily involved and invested in KU basketball.  This is the big event of the week for me and my family.  I sit there in my chair and cuss up a storm at times.  Before this season started, I said this will be a down year for KU, but still should win 25-27 games.  They have surprised me by winning the Big 12 title for the 8th year in a row.  They lack depth and concentration at times and are darn good when they are on their game. 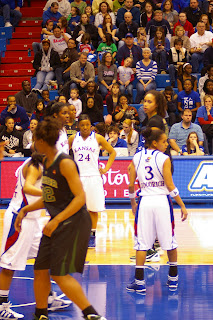 A side-note first:  We hit the jackpot the other day.  I bought four tickets for $12 apiece and add in tax, the total cost was $60.00.  Oh, these tickets were to the KU woman’s game against # Baylor -to make a long story short, the seats were right behind the KU bench.  We could see the coach diagram plays and see the players up close.  At one point in the game, Thomas Robinson and his entourage sat down a few seats from us, but I couldn’t get a good picture since I was boxed in pretty good.  Baylor has a gal named Brittany Griner who is all-everything and is destined for stardom in the woman’s pro league.  She is all that and more.  We are couch tators, but ventured out into the world to see her play.  Baylor beat KU pretty bad. Angel Goodrich of KU, who is part Indian and went to an Indian school in Oklahoma did well in the game.  She is fast and can shoot the 3-pointers.  Sitting behind the KU bench made me feel like somebody and some one saw us on television, so for a few seconds I was a star.  Just kidding!
The next day we had some religious obligations to take care of and made it home in time to watch KU men play Missouri.  This game had the hype and Missouri is good as they come.  They are an excellent team.  Some hate Missouri with a passion.  I don't.  They are good, but so is KU.  Yet, I sat in disbelief when KU fell behind by 19 points. I thought "not in our house." They missed so many free throws and showed the bench is lacking but they fought and fought and start doing things right. I called it a miracle but it's our right as a jayhawk nation.
But I did indulge in selfish prayer when KU was behind by 19 points I said "please, please let my KU come back and win because that Merle guy will never let me live it down" Merle is a guy who lives on the Kickapoo Reservation whose claim to fame is that he’s a KSU fan.  I don’t know why.  It’s hard to explain, kinda like the lack of snow we have received. And Taylor decided to be the hero and make those 2 free throws at the end.  He was due for this break.  Taylor plays so hard and his hard work paid off!  Coach Self said it was the 2nd greatest game he was involved in, the other was the Memphis State game! KU rose in the national polls as a result of this game, getting up to 3rd in the AP poll and could be looking at a #1 seed now.  We have seen this movie before and it hasn't ended well when KU is a #1 seed, but this could be the year that changes.


I never indulged in the drug culture (I never inhaled), but this KU win has me still flying. I watched it again late Saturday night and woke up talking about it. What a game. One of the best come-backs u could ever witness. I think the guy watching over us ungrateful humans has to be a KU fan!
Posted by GM at 9:07 AM No comments:

I want to tell you about the weather, KU basketball, the Super Bowl and a birthday event happening soon. 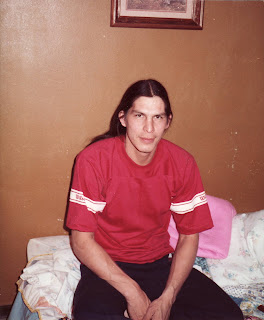 It took until February 4 to see some snow accumulation on our Potawatomi grounds, but it was only a small amount and it melted fast the next day. Up north of us in Nebraska, they had over a foot of snow, so I guess the storms have hit Denver and decided to go around us. Having so little snow isn’t something we plan on here, but it is too early to say we stayed in that pattern.

I don’t know if my expectations are way too high when it comes to KU basketball or not, and I know this is a rebuilding year of sorts, but I get so mad to watch them get beat and it’s already happened five times this year, more than normal. I think the biggest problem KU has is a lack of depth. The starting five can hang in there with just about anybody.  Look at the games against Ohio State, Kentucky, Duke, and Baylor as a testimonial, but when it comes time to substitute, the drop-off is way too huge. When the starting five plays upward toward 30 minutes a game, they get winded and tired at the end and errors happen. Yes, I get mad at Taylor for throwing the ball away or for missing free-throws but giving him a breather on occasion could only help at the end of games. I predicted they would 25-27 games this year and they can, but they will have to work at it to reach that plateau.

I watched the Super Bowl 46 last night. It was a good game although I don’t watch pro sports much anymore. Both teams were good and played very well. Too bad somebody had to lose. I thought about how I watched the first Super Bowl on t.v., when Vince Lombardi’s Packers smoked the Kansas City Chiefs 35-10. I was a great admirer of Lombardi and in the past year I was able to see their home-field and a huge statue of him in from of the stadium, it was a fitting tribute to a great coach.

Also this week, I turn 61 years old. To be truthful, I never expected to hang around that long. Some people go into depression at this age, but to me this is just another milestone and I’m more like that guy on the Gladiator movie when he said “All you can do is look death in the eye and laugh.” What else can I do?

For all those years, I just did normal Indian things – tempted fate on more than one occasion, lived hard at times and eventually slowed down, stayed married to the same woman for going on 41 years – a gal who added balance to my life and gave me the right instruction I needed. We raised a family, saw the good and bad of life which caused a whole bunch of highs and quite a bit of lows, but I let it all bounce off, kinda like that duck we read about. Longevity enabled me to see my two girls grow up, start a family of their own and to give us five grandchildren and one great-granddaughter Ju Ju. That was all good and worth sticking around for.

Throughout this journey, I saw many of my friends leave this neck of the woods, including my twin-brother Larry. That wasn’t enjoyable to see at all, but it is part of this thing we call life. Also, I included a picture of my other brother Bubs.  He left this rez back in 1984.  I sure liked him too, he was one good sheet-rocker and one hell of first baseman.

My birthday is going to be a low-key event -  I told my kids I don't want no big meal, and no gifts but If I get a couple I will be a happy camper.  Instead, I will take my wife to eat somewhere, maybe we will go and look for a giving and caring slot-machine that might hit over and over, and when we have had enough of pursing the gambler dream, we will go to bed and I will give thanks I made it this long.
Posted by GM at 12:14 PM No comments: