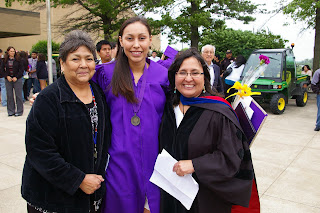 Our granddaughter Tara graduated with a AA degree from Haskell the 13th of May. It has been a long journey for her or so it seems to me. She started out at KCK, a junior college on a basketball scholarship, but things never worked out there for her and she transferred to Haskell and the environment seems to suit her better. I wanted her to stay in Kansas City but sometimes a controlling grandparent needs to step aside and I did.
As we normally do, we had a large group of family and friends at the ceremony. We sat and listened to the speeches and the whole thing took about an hour. I shed no tears but it came close when they announced Tara’s name and she walked across the stage. I thought about when she was a baby, I took a picture with her and she had a hat on with the words “Grandpa’s pride and joy.” (My daughter called her PJ for pride and joy). She was the first grandchild to come through our home doors and to say we spoiled her would be an understatement. My sister, Sandy, later told me “everything was Tara this and Tara that” and how she had to look at every picture and to hear every baby move. I suppose it was out of hand. I guess I was guilty of that. We took her everywhere and boy was she a headstrong kid. I think she was not only spoiled but stubborn. 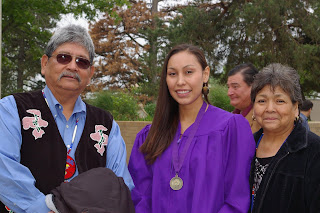 Over the years we had more grandchildren come along and some visited our house and never moved out, kinda like Tara did, but that was alright too. I suppose it caused some hard feelings because we showed her that favoritism, but we spread out the necessary cash to sooth those feelings and today it’s not too bad. I suppose those tears will always almost fall down over that high cheekbones of mine when my other grandchildren graduate because I will remember all those special times I shared with them over the years. I did love them equally. And I’m damn glad I lived to see these occasions.
Posted by GM at 1:55 PM